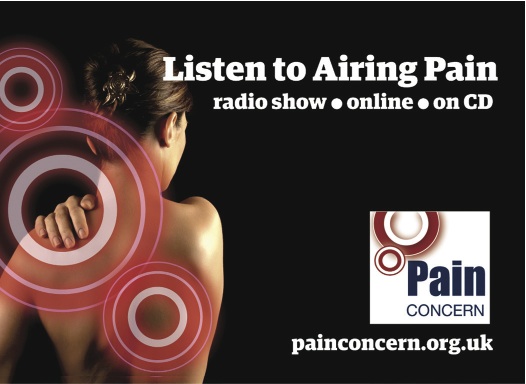 Airing Pain, the popular digital radio programme for people living with chronic pain, will return to the airwaves for a fourth series on Tuesday 22 April at 8pm.

Tens of thousands of listeners tuned into the last series and Pain Concern hope that many more will discover Airing Pain this time around.

The first programme will take a look at two very different ways of giving people in pain the knowledge and power to help themselves – yoga and asking “how are you?”

Christine Johnson speaks to yoga teacher Anna Semlyen about a study that shows yoga can be an effective and cost-effective treatment for chronic low back pain. Semlyen, who helped design the programme used by the research trial, recalls how she has seen people get back into gardening or extreme sports after taking up yoga.

Meanwhile, the real experts on pain are not the clinicians or researchers, but the people who live with it every day, according to academic Gareth Parsons. His research looked at how social rituals as simple as asking “how are you” can be difficult for some people living with pain and how people can find ways to help themselves.

Other subjects to be included in the nine programmes include spinal cord stimulators, young carers, and interviews with people who manage their own everyday pain and internationally-recognised experts.

Airing Pain is produced and presented by Sony Award-winning BBC broadcaster Paul Evans, who says he has discovered knowledge with a ‘life-changing’ impact for his own chronic pain while working on the show. Paul’s experiences are shared by many others, with 80% of listeners surveyed saying they find the radio programmes helpful and 90% saying they would recommend them to others.

New programmes will be broadcast weekly, starting on Tuesday at 8pm on the digital station Able Radio. It is then be available to listen or download on painconcern.org.uk alongside all 54 previous editions.