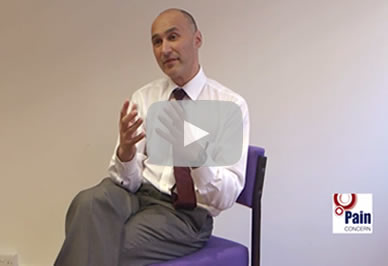 Your GP is likely to be the healthcare professional who’ll be most involved in helping manage persistent pain, but it can sometimes be a difficult relationship. People in pain and their GPs both often feel that there isn’t enough time to deal with a problem as complex as long term pain.

There is no ‘magic pill’ for pain. As with any long-term condition – like diabetes, for example – the best way forward is for people living with pain and their GPs to work together to manage it.

Top tip: make the most of your next appointment by noting down beforehand one or two things that you most want the consultation to focus on.

Find out more: Pain Concern’s Managing Medical Appointments leaflet gives guidance on getting the most out of a consultation.

Dianne Connor: We’ve been brought up that if you have a headache, you take a paracetamol. You’ve got an infection – you go to the doctor who writes you a prescription for antibiotics. When you have a pain, you go to the doctor, he gives you a painkiller. That’s how everybody believes pain should be dealt with. So I think there’s a huge education problem, from the patient’s point of view.

Graham Kramer: All we’ve been able to focus on is the medical management of people with long-term conditions. And it’s very, very limited. I think it’s creating a huge burden of complexity, in terms of multiple medications and things, for people.

Connor: The one GP that does understand – she’s very good, but I can’t always get her, so I don’t go to the other GPs who don’t understand.

Kramer: The evidence does suggest that it’s socialising our patients into being passive recipients of care. Or socialising them into being in a relationship of learned helplessness on the healthcare system.

Connor: So if I go with another pain or something strange going on and I can’t work out where my pain is coming from, I have to start at the very beginning, and in a 10-minute appointment… [sighs] You’ve no hope.

When you’re diagnosed with something and have a chronic pain condition, you want the magic pill! So somebody telling you – ‘well, basically you have an incurable illness and, by the way, you’ve got to manage it yourself… People would not take that in the beginning, that isn’t what people want to hear. But at the end of the day, that is the way forward; and it is the only way forward is to self-manage your pain. And I don’t know how… I mean, that would have to be very cleverly introduced to people, the way you tell people and when you tell people. ‘Cos everybody’s different.

Kramer: I think one of the difficult conversations I have with my patients is getting them to some sort of acceptance, that I don’t particularly have a solution, but trying to be very positive, that I think that there’s a lot that we can do to help. And that we could help by working through this problem together. And I think I want to emphasise that it is very much… I see myself… and often a lot of my patients that I have – we have a very strong positive relationship anyway – so we can begin to use that and build on it, to try and work through the quite intolerable suffering that they’re experiencing.

Connor: I was at a meeting not last week, the week before, where there were two GPs there. And they were in the group that I was working in. And their definition of people with chronic pain was the golfer who comes along, who’s the nuisance patient, who plays twenty rounds of golf a week, who has hurt his knee because he’s playing twenty rounds of golf a week. I was shocked, because I was sat in this group and that’s how they deemed chronic pain – and I thought, ‘Thank goodness you’re not my GPs!’ But I [also] thought that that’s very typical, is chronic pain is [seen] as a nuisance!

Paul Cameron: It’s easy for me, working in a pain clinic who has the luxury of time with patients, to be able to get a really good understanding of that one particular problem. Whereas a GP may know this patient over a long period of time, so they have the time in that regard, but in individual appointments I think they have, on average, about 7 minutes! And that 7 minutes is based around ‘Do they have something really serious, as in life-threatening, or not?’ And after that I think it becomes very difficult for them to actually manage pain.

I find, certainly for patients with complex long-term pain, that it does require that degree of time to be spent with the patient, partly so the patient feels like they’re understood and listened to. And I think when they go into a GP appointment and then quickly back out again, they possibly don’t feel very well listened to. And having spoken to GPs, I don’t think for one minute that it’s because they don’t want to, it’s just because they aren’t able to in such a busy clinic.

Carmen Murray: GPs aren’t experts, you know, in certain fields and obviously they have an overall knowledge of medicine, so it’s sometimes trying to make them understand when you’re in pain how much pain you’re in. Like previously – now I’m trying to reduce my painkillers – but previously when I was in a lot of pain years ago when asking for more painkillers. And you want to be able to, but you’ve got no way of proving to them that you’re in so much pain.

Sometimes you can sort of feel – I don’t know whether this is just a personal thing – but, worried that they’re sort of looking at you and asking [themselves] ‘are you just looking for more drugs’? And you never wanted to be in this situation on your own, where you’re relying on drugs just to get you through the day…

Cameron: We encourage patients when they go to the GP to be clear about what they want to ask. But sometimes they’ll go with the list. And the list is too long, the GP has to essentially go through the list and almost pick out the ones that he or she may think are the most serious ones – and that might not match what the serious ones are to the patient, because they look at the list and think, ‘Okay… which one of these could indicate cancer? Or something [else] more serious’.

And the patient might think, ‘that isn’t what I wanted you to look at, the most important one was at the top of the list’. And, of course, then you get that mismatch. But it’s a 7-minute appointment, so you can understand why these attitudes start to generate –misunderstandings between the patient and the professional.

Cameron: I have to say, I was involved in a pilot in Arbroath in a GP practice that was kind enough to let me invade their practice and try to identify patients that might be at risk of developing chronic pain, just through the medications that they were taking. And what I found really was quite stark – and I didn’t appreciate it until working with them – was just looking at their computer screen: they had half an hour per patient, which I thought isn’t very long, because I’m used to a bit longer with my patients.

But then I saw the lists of the other GPs in the practice and I was just taken aback by the sheer number they were seeing in a day. And at that point I thought it really made sense as to why patients feel like they’re not getting very much time and GPs feel like they’re rushed and they have to prioritise their appointments. And they have to prioritise what they talk about during the appointments, as well.

Kramer: I think we need to have more training in having these different types of conversations with our patients. I went to a workshop recently – a group of very experienced GPs – and we were looking at changing the approach to the management of people with diabetes. The doctors found it very, very hard to change from their traditional role of being in control. And they were trying not to be! They couldn’t help leaping in at certain times and taking control.

Connor: There was this meeting that I was at two weeks ago, where it was about the GPs in Fife to attend. And hardly any of the GPs I knew were there. So, I think, it’s like you can take a horse to water but how do you make it drink…?

Murray: I described the pain as much as I could. I was telling her that I wasn’t sleeping. I was pacing the room. I fell down the stairs at work because my legs were starting to go so weak, you know… I’m not really sure how I could have explained it better.

Connor: We need the same time or understanding.

Murray: What you want from your doctor is somebody who’s actually listening to you.