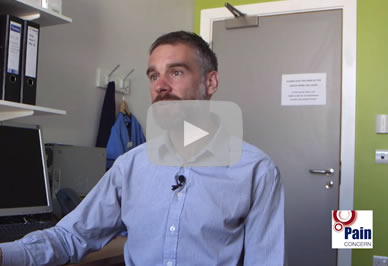 Doctors and patients can both get caught up in an almost endless search for a cure or a clear diagnosis of what’s causing the pain. Searching for a medical solution is understandable, but it can delay people in starting to learn to manage their pain.

With the right support and guidance from healthcare professionals, people can move towards playing an active role in their care, often becoming less dependent on medication.

Top tip: results on MRI scans don’t usually help us to understand what’s behind persistent back pain – many people without pain will have ‘bulging discs’.

Find out more: Pain Concern’s leaflets on medicines, such as Opioids, Antidepressants, Amitriptyline and Gabapentin & Pregabalin have really helpful advice on using pain medications effectively and how to reduce your medications safely.

Paul Cameron: There’s barriers related to the attitudes of people. There’s barriers related to the understanding of chronic pain and that can be with patients and health professionals, so, for example, patients who have chronic pain but are looking for a cure or are looking for more investigations to find a way to get it cured. They have their own barriers in terms of being able to move forward and actually manage their pain because they’re still looking for that cure, and they’re looking for more investigations, possibly surgery. These are ultimately going to be delays that will stop them really from being able to manage their own pain.

Across specialisms, orthopaedics, neurologists, GP’s, everyone wants to ensure they don’t miss something. You wouldn’t want to be the one that misses something serious, so that’s why these investigations all end up being done for a lot of people in chronic pain.

Steve Gilbert: When we see somebody with pain that has become a problem for the patient, then we’re wanting really to listen to them and find out if there’s something that has started the pain, if there’s anything that we could identify that has made it worse or if there’s anything that’s helped it. And what we look for in medicine are red flags. These are indicators that we might have to do some more tests. They’re not necessarily an indicator that there is an underlying serious problem.

Lars Williams I suppose the bread and butter of the pain service is back pain. That’s probably the most common condition that we see and that’s a situation in which there is usually a clear diagnosis – musculoskeletal or mechanical back pain. There might be an MRI [Magnetic Resonance Imaging] scan that shows wear and tear changes, but it doesn’t really matter – we know the extent of changes on an MRI scan bear very little relation to how much pain people experience.

So, although patients will come to us wanting some further clarification of the problem – ‘I’ve still got this problem. It’s not been fixed. Is there any further test we can do to show exactly where it is? Because if you find exactly where it is, then I’ll be able to have the proper treatment.’ But from our point of view any further investigation would be pointless. In that sense, that particular option… you’ve gone as far as you can in that direction, looking for a diagnosis, looking for an explanation.

Gilbert: If you go on looking for something and doing more tests, what many patients experience is, they’ll get an MRI scan and they’ll be told ‘Oh, look, there’s some disc bulging there’ or alternatively they’ll be told ‘there’s nothing to see on this scan, we haven’t got an explanation for your pain’. And in that situation the patient can feel they’re not believed, the doctors saying there’s nothing really wrong with them.

Gilbert: And of course what we’ve seen on the MRI scan is only the structural components of the spine. Many people get discs that bulge and don’t have any symptoms at all, so when you get to my age, round about two thirds of people have got bulging discs and they’re wandering around absolutely fine – it’s not giving them any trouble at all. But telling them they’ve got bulging discs might plant a wee bit of worry in the patient’s mind.

And similarly, we can’t see what the nerves are saying to each other or the messages they’re sending. So, if we don’t see anything on the investigation, the MRI scan or the X-ray, that doesn’t mean the pain sensing nerves aren’t sending pain messages. Usually, people don’t come and make up pain.

Williams: The patient’s story is what you’d expect from the referring letter. So often the referring letter would be saying ‘This woman has knee pain. We’ve done everything we can for her knee, her knee looks fine to us but she’s still complaining bitterly of knee pain’. But then when we have the luxury of 45 minute appointments and during that 45 minutes a different story often emerges. It’s not just the knee, that’s a small part of it – it’s lots of other things as well.

Cameron: If any individual has pain that starts to be persistent, that changes and develops over time, it’s absolutely understandable that someone is going to try and find out what it is. Part of our culture, I think – Western Culture – is we’re brought up to go and see our doctor. Our doctor will find the problem, they’ll send you to a specialist, the specialist will cut out the problem or give you the right medication for the problem. When that sort of process doesn’t happen – and it’s one that’s quite ingrained in all of us I think – I think that’s where the difficulties come.

Williams: An orthopaedic surgeon might have said something along the lines of ‘We’ve done everything we can. This is something you’ll have to live with. You’ll have to accept that you have pain, just go on and live your life.’ And it’s seen by the patient concerned as a very sort of glib and unsympathetic way of dismissing them. So it’s quite a hard sell to take that message and present it as something a bit more positive.

Cameron: You’d think well I must be at the wrong specialist, so I’ll have to go back to my GP and try and get to a different specialist and that goes on and on and on, until eventually everyone realises, that actually, there is nothing else that can be done in terms of surgery, in terms of different medications, for example. And the patients themselves come to that realisation, but that can be a long process. Some people come to that realisation very early but others – in the main I would say in my experience – come to it a lot later.

Gilbert: If a patient has some worries that there might be something serious underlying, then I’ll explain I’ve had a look at you and I’m pretty sure that everything is structurally sound here and I’ve found a good explanation for why you’ve got pain. I’ve found a bit that’s really sensitive and is really tightened up and otherwise healthy, so I think we can go ahead with a rehabilitation approach.

Carmen Murray: To understand my pain, he [Dr Steve Gilbert] said to begin with it would be a massive help to me to understand what this pain is that I’m going through. So like, he was always recommending books for me to read, websites for me to go on… some people might go home and think this isn’t going to help me, [but] it has helped. So that’s what they’ve done to begin with, just tried to be there to support me.

My consultant’s really good. He gives me a phone call every two weeks to see how I’m doing, which is great. You just feel like somebody is on your side, that you’re not trying to battle against somebody, somebody’s there with you, they’re going through it with you in a way.

Gilbert: Carmen had her surgery on her spine and she continues having an awful lot of pain, which was managed with really strong painkillers and when I had a look at her back, there was the scar there, but there wasn’t any pain in the scar, and the muscles were very tight and there was lots of sensitivity. And that was despite her having taken all her painkillers.

Murray: Understanding the problems of being on long term painkillers and how maybe reducing them… to begin with I thought, well, surely if I’m going to reduce the painkillers, I’m going to be in more pain. But then trying to learn that this might not be the case, that my body’s own painkillers will start to kick in and might even do a better job. And I have a lot of problems sleeping, bad dreams constantly and I’ve learned that this could be a problem with the painkillers as well.

Gilbert: The way that the nerves were all working was fine, so there wasn’t any deformity and the nerves were all working and I would say to her ‘Your spine’s quite strong now. We need to try and get things to be more relaxed and less sensitive’. And she’s made a massive improvement just because of that – a lot more confidence in her back and the way things are working.

Murray: What they’ve helped me with is knowledge and just being there to support me through this, is the main thing, just feeling like I’m not completely alone in all this.