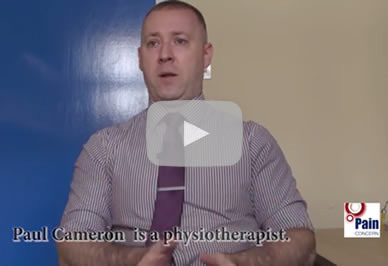 ‘Self-management’ doesn’t mean being abandoned to ‘get on with it’ alone. Support can come from healthcare professionals, family, friends, voluntary organisations or support groups.

If pain is having a big impact, pain management programmes can help people to get their lives back on track. This involves focusing on what’s most important in life – this could be relationships, activities, work – and learning how to be more involved in them without flaring-up the pain.

Top tip: control the pain by finding your baseline. That’s a level of activity you know you can do without flaring-up the pain. From there you can build up slowly.

Christine Hamilton: If I hadn’t gone on that pain management programme, I probably wouldn’t be here today, that was my last dash, my last hope. I kind of made my mind up I wasn’t going to carry on – sorry – [tearful] I’ve told my husband this as well, so he knows.

Paul Cameron: There are different types of self-management: there’s supported self-management that requires the individual to have a network of people around them to help them and that could be health professionals, volunteer organisations, support groups, family; and then you’ve got the true… the self-management of literally just looking after it yourself.

And actually, it might be likely that the majority of the population do self-manage like that, because if you’re to go by those figures of 18 per cent of the population, clearly, hundreds of thousands of people do not access the charity groups and the pain clinics and their GPs. Most people will manage themselves. And I think we’ve all known when we wake up with back pain and we get on with it, we do things ourselves. Most people manage in that way and that’s self-management as well.

Cameron: But you then have the other end of the spectrum, where people with much more complexity around pain and all the other arms to that in terms of the social and work life and all the impacts it’s having on their life. These people tend to need a bit more support, particularly if they’ve gone through a history of a lot of hospital appointments, different specialists doing different tests and then they end up in a pain clinic. And that’s generally the people we see here, those that require much more supported self-management.

Martin Dunbar: Self-management isn’t just getting on with it, it’s something much more active than that. It’s recognising what’s important to the person, understanding that activity needs to be managed in a certain way – or it helps anyway if activity is managed in a certain way. Plenty of patients of course will tell you that they have tried to get on with it; they’ve tried their hardest to get back to something; they’ve maybe taken their doctor’s advice and gone swimming and they’ve ended up spending a week in bed in agony afterwards and so they struggle to see how that might work. So it is a very active process.

Lars Wiliams: People come to us in the in the pain service at different stages. If they’re at the stage of relatively recent problem or recent diagnosis, understandably, they are still looking for a cure and they can’t envisage leading the rest of their lives with this chronic problem. It’s understandable – people expect that pain is something you just take a tablet for and it goes away. We’ve got all this technology, we’ve got computers, something as simple as pain should be easy to get rid of.

Hamilton: I was refused the first time I was interviewed for the pain management programme because I wasn’t well enough. So the opposite of what the consultant said, that I basically wasn’t well enough, I wasn’t in the right place to be open enough to the tools and techniques. So I was refused the first time I applied for it and I walked out of the interview feeling devastated, but actually I understood why. So I had to pick myself up a little bit and I did pull myself up a wee bit so that when I was interviewed again, I was in a much more positive mindset.

Williams: A lot of the time, some days we will see somebody who has been re-referred two years down the line and they are starting to think, ‘well this is how my life is going to be, so I should now really make the most of it, rather than wasting all this time and energy looking for something that isn’t there.’

Dunbar: I think the most important thing is to help people recognise that medical management has its limitations, I think. Although it can be very successful for some people, there are certainly lots of people where medical management hasn’t helped enormously and an awful lot of people in the middle who it’s helped partially, but then it’s come with problems itself, side effects from medication. So it’s helping people to accept that they’re probably always going to have a degree of pain – that’s a big part of it – but that their efforts around pursuing medical help has only produced limited benefits for them and also produced some difficulties for them frequently.

So that sets the scene for working on relationships, activities, hobbies, work even, despite having ongoing pain. I think for a lot of people that’s the mental shift, I think a lot of people tend to work with the model that if they rested enough, then their pain would settle, then they would be able to get back to doing their things. But that kind of leaves aside the fact that things deteriorate anyway if you’re not doing them.

Cameron: Managing your pain is not about doing less activity, it’s about doing it in a clever way. It’s about pacing yourself. So, for example, if somebody knows says they can walk 100 metres but by the 100th metre they are in agony, they have to stop and their pain is controlling them. We want them to control the pain, rather than the pain controlling them, so we would ask them to walk 50 metres, stop, pause – just have a very short break – another 50 metres.

Dunbar: Then we also help people to think about what’s important to them and to set goals around that. Then we look at what’s preventing people from achieving those goals and doing the things that are important to them. Those barriers can be physical fitness because people’s physical health has deteriorated while they’ve had this pain problem. It can be concerns about managing flare-ups, making sure that they don’t exacerbate their pain by doing more. So there’s a whole notion of how to manage activity in a way that will work.

But often, barriers are psychological for people: there’s the motivation that I discussed already, but people also frequently have concerns about what other people might think of them. They might have concerns about how they can manage feeling anxious and stressed when they do put themselves back into situations that they’ve not been in for a while, so psychologists help with that.

Kramer: People who are enabled to be in the driving seat of their care, tend to not only live better, live healthily, they often have less exacerbations of their chronic condition. They often require less medication and they often require less hospital utilisation and, fundamentally, I suppose and in health economics terms, it saves money. And so, you can invest in supporting self-management and not only do you have improved personal outcomes, you get improved medical outcomes as well, so it’s a win-win. You also get a much healthier functioning health economy.

Williams: We measure outcomes in terms of things like depression, anxiety ratings, things like chronic pain acceptance score, which is in some ways a measure of psychological flexibility, a measure of how willing people are, or able people are, to live and do things with pain. But often the measures or the changes of measures when you look at them on an individual level, they often don’t correspond that well to the changes that we see just talking to and listening to what the patients say in the group. It is really interesting to watch how people change over the course of the twelve weeks.

Christine Hamilton: Three years ago I couldn’t even walk across the floor and I was only on the pain management programme last year, so the tools and techniques that I learned have got me to the stage I’m at just now. I’m still learning, I’ve still got my L-plates on my back, I still make mistakes and there’s still tools that I maybe look at in the folder now and then, and dismissed at the time, and now I look back and look again.

Dunbar: When the messages have clicked with people, then people do seem to make extraordinary gains – returning to work, for example, or being able to stay in work, doing the things that are important to them again. It involves a lot of work on the patient’s part, though – I think that’s a bit of a difficulty. I think we’re used to a medical system where we’re passive recipients of what doctors and nurses and physiotherapists and OTs do to us. And I think in the UK in general, we’re in the early stages of that journey of learning more about self-management. But I think it’s true not just in chronic pain but in lots of other conditions as well, that there’s an awful lot that people can do for themselves and that maybe the health service isn’t best set-up to provide that, but it’s definitely improving though.

Paul Evans: Has your husband got his wife back?

© 2010-2021 Pain Concern. All Rights Reserved.
Registered Charity no. SC023559. Company limited by guarantee no. SC546994. 62-66 Newcraighall Road, Edinburgh EH15 3HS
https://painconcern.org.uk/cordless-car-vacuum-cleaner-eraclean-best-handheld-vacuum/
We use cookies on our website to give you the most relevant experience by remembering your preferences and repeat visits. By clicking “Accept All”, you consent to the use of cookies. Read More...
Cookie settingsACCEPT ALLREJECT
Manage consent

This website uses cookies to improve your experience while you navigate through the website. Out of these, the cookies that are categorized as necessary are stored on your browser as they are essential for the working of basic functionalities of the website. We also use third-party cookies that help us analyze and understand how you use this website. These cookies will be stored in your browser only with your consent. You also have the option to opt-out of these cookies. But opting out of some of these cookies may affect your browsing experience.
Necessary Always Enabled

Performance cookies are used to understand and analyze the key performance indexes of the website which helps in delivering a better user experience for the visitors.

Analytical cookies are used to understand how visitors interact with the website. These cookies help provide information on metrics the number of visitors, bounce rate, traffic source, etc.

Advertisement cookies are used to provide visitors with relevant ads and marketing campaigns. These cookies track visitors across websites and collect information to provide customized ads.

Other uncategorized cookies are those that are being analyzed and have not been classified into a category as yet.

SAVE & ACCEPT
Powered by