Breaking Barriers #2: What is self-management? 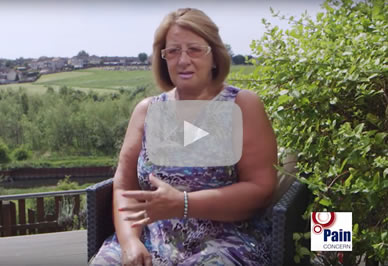 That’s the key to man­ag­ing pain, accord­ing to Diane. It can be a long, wind­ing road, but many peo­ple liv­ing with pain have learned strate­gies that help them to get the most out of life along­side their con­di­tion, rather than being dom­i­nat­ed by it.

Top tip: make pac­ing more appeal­ing. Start by choos­ing an activ­i­ty you find reward­ing and enjoy­able. Then, build up slow­ly and steadi­ly to doing more.

Find out more: Pain Concern’s book­let Man­age Your Pain is a great place to start learn­ing about the things you can do to man­age your pain, includ­ing pac­ing and deal­ing with flare-ups.

Thank you, just the reminder I need­ed on a very bad day. 🙂

So help­ful 5 days off mor­phene and sit­ting and hob­bling about in pain. Years of it meant I know I will always be in pain. Your video helped on this day with no spoons, I will search on for relief beyond drugs and use your ideas.
There will be so many more of us sur­viv­ing ill­ness or acci­dent and liv­ing with it. There is a need for more fund­ing and help. There are excel­lent doc­tors we just wait too long to see them.

Thanks for your com­ments, Aman­da. Real­ly glad you found the video helpful.

Amiltyptaline worked for a while but my leg pain became so bad, I could hard­ly walk. I was made to go on the cheap­er Fen­ci­no as Buphrenor­phine was expen­sive but it is the only thing which eased my pain.

I have kept to the same dos­es for years as I ini­tial­ly tried the Fen­ci­no 75 but could­n’t tol­er­ate it. Gabapentin does not even touch my sciatica.

So, I am not addict­ed but do not want to go back to the ago­niz­ing pain of yes­ter­year and end up in a wheel­chair. I man­age my con­di­tion, can walk short dis­tances with a walk­er but have to sit down sev­er­al times dur­ing a trip to a supermarket.

Dur­ing a ten minute appoint­ment with a Nurse Prac­ti­tion­er I had nev­er seen before, she said she would have me off the Fen­ci­no. I felt, It was just part of a gov­ern­ment reduc­tion scheme and no thought had been giv­en to my man­age­ment of my own condition.

I am addict­ed not to go back to how it was, as it had me in con­stant pain and tears. Read­ing many reports, the pain angle was not addressed or even report­ed as it would occur as anx­i­ety or stress would kick in as if this was a rea­son to ignore the very rel­e­vant rea­sons the med­ica­tion was pre­scribed ini­tial­ly. Anx­i­ety and stress are very good get out of jail cards for ignor­ing what patients who are or will be in acute pain will be telling doctors.

If is it a chron­ic con­di­tion, it is not like­ly to get bet­ter or the pain reduced, so this will mean, wheel­chair mobil­i­ty, full time car­ers for per­son­al care and agony for the sufferer.

Where oth­er forms of treat­ment are suit­able for younger patients, it is very cru­el to inflict this on the elder­ly who have aging bod­ies and long term con­di­tions and their future is bleak indeed. I know, I am one and if my pain goes back to how it was with the same inef­fec­tive med­ica­tion, I hope I do not live a very long life, the future looks agonizing.